Today I've got debut author John Corey Whaley at Writing from the Tub, talking about his dream soundtrack for his YA novel, Noggin.

Before we launch into the songs I wanted to share the gorgeous cover art and summary for Noggin, in case any of you haven't heard of this one yet. Does the cover art remind anyone else of David Levithan? Just me? Either way, I think it's a brilliant design. 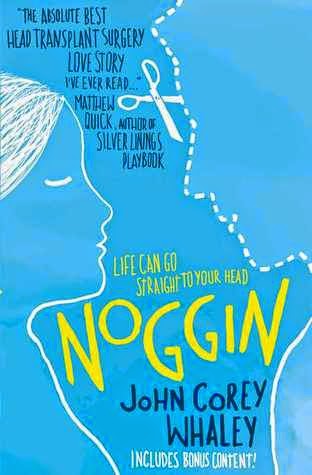 Summary (from Goodreads): Listen — Travis Coates was alive once and then he wasn’t.
Now he’s alive again.Simple as that.The in between part is still a little fuzzy, but he can tell you that, at some point or another, his head got chopped off and shoved into a freezer in Denver, Colorado. Five years later, it was reattached to some other guy’s body, and well, here he is. Despite all logic, he’s still 16 and everything and everyone around him has changed. That includes his bedroom, his parents, his best friend, and his girlfriend. Or maybe she’s not his girlfriend anymore? That’s a bit fuzzy too.Looks like if the new Travis and the old Travis are ever going to find a way to exist together, then there are going to be a few more scars.Oh well, you only live twice.

And now you know a bit more about the book, let's take a look at some of the songs the author would put on the book's soundtrack:


Head Over Heels by Tears for Fears

--->Not only is this song IN the book, but is also my all-time favourite song from the 80s.

Girls Like You by The Naked and the Famous

--->This song has a very nostalgic quality to it that I think fits NOGGIN very well.  Also, it's about a guy in love with a girl, which is pretty much what the book is about.

--->This song, and the whole album, reminds me of my favorite music from the 80s and early 90s, in a way that I believe fits with NOGGIN, which I wrote to feel similar to a John Hughes movie.

Pop Music of the Future by Say Hi to Your Mom

--->I used to listen to this song in college a lot I stumbled across it again while I was working on NOGGIN and, with a title like that, how could I NOT use it on this playlist?

---->There are few songs that can make me tear up as soon as they start playing and this is at the top of that list. It's meant to be heartbreaking, just like parts of this book.

--->This was one of the first songs that I knew I'd include on this playlist from the outset of writing NOGGIN.  It's just so  fun and also super quirky, which is what I was aiming for in parts of the story.

--->This is a remake of the original song (I think I heard this version on The OC years ago) and I fell in love with it.

Haim and The Naked and Famous on one playlist? Yes, please!
Posted by CarlyB at 05:00