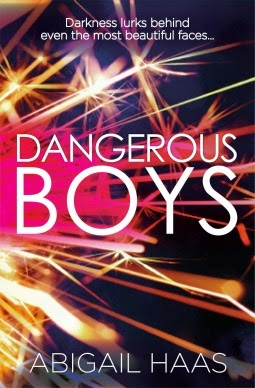 Summary (from Goodreads): Three teens venture into the abandoned Monroe estate one night; hours later, only two emerge from the burning wreckage. Chloe drags one Reznick brother to safety, unconscious and bleeding; the other is left to burn, dead in the fire. But which brother survives? And is his death a tragic accident? Desperate self-defense? Or murder?

Chloe is the only one with the answers. As the fire rages, and police and parents demand the truth, she struggles to piece together the story of how they got there-a story of jealousy, twisted passion, and the darkness that lurks behind even the most beautiful of faces…

My review: After reading and loving Abigail Haas' Dangerous Girls last year, I couldn't wait to receive a copy of Dangerous Boys, which I had very high hopes for. A copy arrived for me last week and I read it the same day it arrived - once I started, I simply couldn't put it down. This is one more-ish story that will have you racing through the pages to discover what really happened when Chloe Bennett and the Reznick brothers went into the abandoned house on a night that ended in tragedy...

The narrative in Dangerous Boys is split between 'Then', which shows us the events that take place before the night in the abandoned house, and 'Now', which shows the aftermath of the fire. During the 'Then' sections we see Chloe meeting Ethan, the younger Reznick brother, their blossoming relationship and how complicated their lives become when Oliver, the enigmatic but troubled older Reznick brother, comes onto the scene.

I adored the story in Dangerous Boys, particularly the mystery about what really happened in the house and who made it out alive, as this is something we don't find out until almost the end of the book. While I was reading I kept changing my mind about who had done what, who I sided with, who made it out alive - I just couldn't make my mind up and in every chapter a new clue was brought to light. I love mysteries and this is a great one - I really don't think the denouement is anything a reader would see coming and I love that Haas kept me guessing until the final pages, just like she did in Dangerous Girls.

However, I did struggle a little with the characters in Dangerous Boys, as I didn't find myself warming to any of them in particular, so I wasn't really rooting for anybody as they all fell a little flat for me. I found Chloe a bit insipid in the beginning of the book but as she grew as a character I did find myself liking her a lot more towards the end of the story. However, when it came to Ethan and Oliver I really wasn't keen on either of them - Oliver was slimy rather than charming and pretentious in a way that just irritated me, whereas Ethan was way too soppy and clingy to be considered a compelling love interest. Now I've finished the book I'm sure they were both written with these flaws on purpose but it did grate on me a little as I was reading.

However, irritating characters aside, I flew through Dangerous Boys and read it in a single sitting because I was so engrossed by the story. If you're looking for an easy to read, summery mystery then this is absolutely perfect for you - let's just hope the sun stays shining until it's released in a couple of weeks!
Posted by CarlyB at 09:56