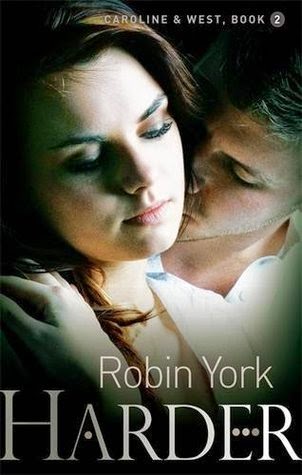 Pages: 339 pages, paperback
Standalone/series: This is book two in the series
Acquired: Kindly sent for review by the publisher

Summary (from Goodreads): Caroline still dreams about West. His warm skin, his taut muscles, his hand sliding down her stomach. Then she wakes up and she's back to reality: West is gone. Before he left, he broke her heart.
Then, out of the blue, West calls in crisis. A tragedy has hit his family-a family that's already a fractured mess. Caroline knows what she has to do. Without discussion, without stopping to think, she's on a plane, flying to his side to support him in any way he needs.Though they are together once more, things are totally different. West looks edgy, angry at the world. Caroline doesn't fit in. She should be back in Iowa, finalizing her civil suit against the ex-boyfriend who posted their explicit pictures on a revenge porn website. But here she is. Deeply into West, wrapped up in him, in love with him. Still.They fought the odds once. Losing each other was hard. But finding their way back to each other couldn't be harder.

Review: Picking up shortly from where Deeper left of, we're plunged right back into the heart of Caroline and West's complicated world, and things are even more complicated this time around. When the ex-couple are finally reunited it's instantly clear that West isn't the same person he was in book one. He's older, stronger, more jaded and much, much angrier. While I couldn't believe some of the awful things he did out of fear and spite (I wanted to give him a sharp clip round the ear a couple of times), one of the things I like the most about Harder is that it's unflinchingly realistic.

Caroline and West's story isn't a Hollywood love story, by any stretch of the imagination. It's complex and, at times, difficult and hurtful but it always feels real. The struggles they go through may not be what every couple goes through, but anybody who's been in love can understand the ache, the unconditional acceptance, the fear that it may all go wrong. This is something Robin York does extremely well, as even though I've never been in the couple's situation, I always understood their emotions - particularly Caroline's.

I think it's really easy to write West off as a bit of a dick but we learn so much more about his character in Harder, it's difficult not to sympathise with him when you meet his family and start to understand the struggles he's gone through. He's been taken advantage of by numerous people throughout his life, in many different ways, and it shows. His walls are a thousand feet high and in Harder we find out whether Caroline really is the person who can break down West's defences and help him truly make peace with his past.

So, this series is a bit of a revelation to me - as it's the first time I've read anything new adult and enjoyed it. Hooray for Caroline and West! And Robin York, of course. While I'm certainly not a NA convert, I am a big fan of this series and would absolutely recommend it to any and all new adult fans!
Posted by CarlyB at 07:00