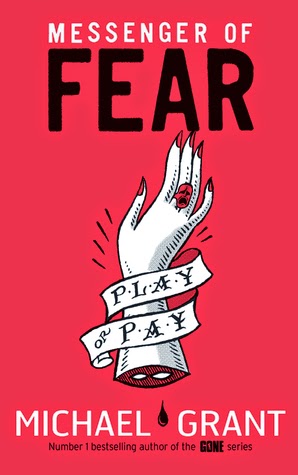 Published: August 26th 2014, Electric Monkey
Pages: 309 pages, proof
Standalone/Series: This is book one in the series, with book two (currently untitled) due out next year
Acquired: Kindly sent for review by the publisher

Summary (from Goodreads): I remembered my name – Mara. But, standing in that ghostly place, faced with the solemn young man in the black coat with silver skulls for buttons, I could recall nothing else about myself.
And then the games began.
The Messenger sees the darkness in young hearts, and the damage it inflicts upon the world. If they go unpunished, he offers the wicked a game. Win, and they can go free. Lose, and they will live out their greatest fear.
But what does any of this have to do with Mara? She is about to find out . . .

My review: This was one of my most hyped books of 2014 and I'm happy to report that it didn't disappoint in the slightest. After reading a succession of disappointing books at the end of the summer I was a bit nervous when I delved into this, as I had such high hopes for it, but all of them were met and exceeded. Isn't it lovely when that happens?

I've been a fan of Michael Grant's books since I discovered the Gone series during my early days as a blogger. He has a real talent for creating richly realised worlds that are almost our own but...with a few quirks, and I find his persuasive, immersive writing makes it impossible for me not to suspend my disbelief while I'm reading his books.

I'm more of a contemporary girl but I received my copy of Messenger of Fear right when I needed it most. I'd read a slew of disappointing books and was in a midst of a deep reading slump. I wanted something totally different to pull me out of my funk and this delightful treat was just the ticket. I blitzed through this in a couple of sittings in a single day and felt wholly satisfied and entertained when I turned the final page. This is the first in a series but it has the perfect blend of being a self-contained story as well as a brilliant opening book that piques your interest and leaves you wanting more, without ending on a frustrating cliff hanger.

Messenger of Fear contains definite elements of horror, which had me clapping my hands with glee, as you can imagine. What's even better is that the horror scenes are genuinely scary and had me feeling more unsettled that a lot of pure horror releases I've read this year. There's a lot to think about in this book and if you were a fan of the first Saw film you'll definitely feel the same 'damn, what if this actually happened? How would I fare?' unease that you felt in that movie. For non-horror fans, though - don't worry, this isn't filled with gore like the Saw movies, it just has the same interesting study of karma and retribution.

Memorable characters (the Messenger is one of my character highlights of 2014 and I can't wait to learn more about his backstory further down the line), a rip-roaring white-knuckle ride of a story and some top notch writing - it doesn't get better than this. Oh, and get a load of that cover; fantastic, right?