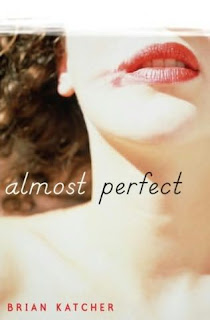 Published: October 2009, Delacorte
Acquired: Sent from Curled Up With a Good Book


What would you do if someone you thought you knew revealed a secret that changed everything? Would you stick by them? Would you turn on them? I think we’d all be quick to say we’d stick by them, but how do you really know? This is one of the questions Brian Katcher addresses in his fantastic novel Almost Perfect

feeling a little unexcited. Sure, the cover was interesting and the story sounded pleasant enough: heartbroken Logan Witherspoon can’t get over his ex-girlfriend, but then a ‘quirky’ girl from out of town walks through the school doors and changes Logan’s life forever, etc. Wrong.

My first error may have been not actually reading the entire blurb on the inside cover. I must confess, I read the first couple of lines, assumed it would be the standard high school love story and began to read. Big mistake on my part, because Almost Perfect

is one of the most delicately written, beautifully executed stories I’ve read in a very long time.

At first, I still had reservations about the story. Logan is a great narrator and brings the story to life, but by the end of the first couple of chapters I was already bored of his pining after Brenda. However, once Sage comes into the picture, things certainly change for the better. She’s smart, unique, and brilliantly written.

It’s Katcher’s stark honesty that I really love about this story. When Logan finds out Sage’s secret, the way he reacts is horrible but - I think if we’re all honest - it’s the way anybody would react. Logan is only human, and even though it isn’t pleasant to read, it’s better than a fake story where the emotions and reactions are forced.

It’s a complex situation for anybody to be in and something that I haven’t read much about, especially not in young adult fiction. The issue (sadly) still is taboo, but brilliant authors like Brian Katcher are helping. Katcher writes with a softness that I never expected; one of my favorite passages shows this perfectly:

‘Everyone has that one line they swear they’ll never cross, the one thing they say they’ll never do. Not something serious like I’ll never kill anyone or I’ll never invade Russia in the winter. Usually it’s something less earth-shattering.

We draw the line. Maybe we even believe it. That’s why it’s so hard when we break that promise we make to ourselves.

Sage Hendricks was my line.’

Inevitably, during the closing chapter, I cried. It’s not exactly difficult to make me cry, but this story really struck a chord even though the issues in this book have never affected me. At some points I actually came away feeling angry. It’s only a really powerful story that can change your emotions like that. Katcher’s note at the end of the novel is something I’m really glad he included, a sweet addition - make sure you don’t miss it.

The book is rated as suitable for ages 14+, and although there are a lot of complicated emotions and issues there, I do agree. It’s important that situations like the one Sage is in aren’t hidden from younger readers.

If you look forward to any recently released book, it should be Almost Perfect

. Seek it out. It’s a beautiful, touching story that will stay with you for a long time after you’ve finished reading.