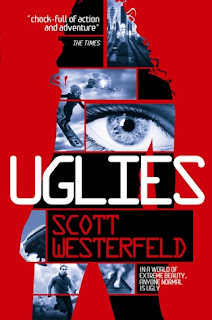 Summary (from Goodreads): Tally is about to turn sixteen, and she can't wait. Not for her license—for turning pretty. In Tally's world, your sixteenth birthday brings an operation that turns you from a repellent ugly into a stunningly attractive pretty and catapults you into a high-tech paradise where your only job is to have a really great time. In just a few weeks Tally will be there.

My review: I’m always up for a good dystopian novel and I’d heard from pretty much everybody in the blogosphere that Uglies is one of the best. Yes, yes it is.

Tally Youngblood is our heroine here. Desperate to become Pretty and join her best friend Peris in a life of partying, having fun and generally being beautiful, Tally is counting down the days until her sixteenth birthday, when she can turn her back on being Ugly forever. At last. She’s spent years perfecting what she wants her new face to look like and is determined that nothing will stop her becoming Pretty. That is, until she strikes up a friendship with Shay, a girl who is due to turn Pretty on the same day as she is.

Together Tally and Shay spend their last few weeks of being Ugly breaking all the rules but things take a serious turn when Tally takes Shay out of the city borders and away from everything she knows. Shay tells her that you don’t have to become Pretty. You can stay Ugly and stay true to yourself. She tells her about a group of people who never became Pretty and, instead, started a new settlement where people are free to think and be who they want to be. She’s made the decision to go with David, the enigmatic leader of these people and asks Tally to go with her.

When Tally is given an ultimatum – either find Shay or stay Ugly forever – she leaves in search of Shay and her new people. However, what she finds on her journey changes everything she ever thought she knew about her world.

Tally is a wonderful heroine. She’s so likeable and is definitely one of the most memorable characters I’ve come across in a long time. She’s sweet but not a pushover and she delivers some brilliant lines. She’s also very real. Her actions are 100% believable and I found it so easy to suspend by disbelief and get carried away by the story, despite the fantastical elements.

I haven’t read the rest of the series yet but Pretties is looking at me now from my bookshelf so I’m definitely going to dive into it soon. Surely an Uglies film must be on the horizon soon? If done well, I think it could be phenomenal.

First line: ‘The early summer sky was the colour of cat vomit.’